Enter your City name or Pincode

An ancient Buddhist bastion called Dharmapattanam, this island and mainland combination is currently called Dharmadom. It is situated in Thalassery taluk in Kannur. It is famous for its century old. Brennan college and Dharmadom island. 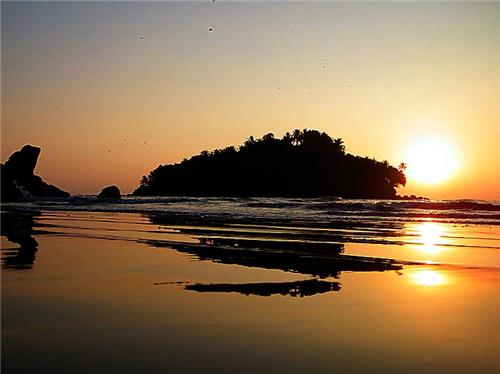 It is also called the Green Island. This island covers an area of two hectares. It is a private island which is located 100 meters from the mainland. The island is totally covered with lush greenery and dense coconut plantations. The island was taken over by the tourism development department of Kerala state in 1998. During low tide one can easily wade from the mainland to the island along the Muzappilangad beach, however, prior permission is required to get on to the island. It is an ideal picnic spot.

Andalur Kavu is located in Dharmadam town. It is one of the very well known ‘kaavus’ to the north Kerala. The deities in the temple are those of Sri Rama, Lakshmana and Hanuman. This is a temple dedicated to Sri Rama as parts of the Ramayana such as SundaraKanda and Yudhakanda are reflected here. But then as Padmashiva is furthermore worshiped alongside Sri Rama, one cannot state that this is a Sri Rama Temple.

Once the carnival begins at the temple of Kumba, all residents of Dharmadam become vegetarians for a week, older people lead community life. Persons greet visitors with puffed rice or Aval, malar and bananas. The God Sri Rama's deity is constructed facing the Cheraman Temple. Throughout the rule of Cheraman Perumal the idol of Sri Rama went missing and was subsequently found by the persons from the Melur River states a legend. It was subsequently established in the temple. During the customary dance here the grove below the temple is advised to be Lanka in the Ramayan. Bows and Leaf umbrellas are used to symbolize the Ramayana conflict throughout the possession.

How to Reach Dharmadom Island

The Dharmadom Island is situated at a distance of just four kilometers from Thalassery. It is also easily approachable on foot from the Muzhappilangad beach during the hours of low tide. Formal permission, however, is required for getting onto the island. The nearest railway station is at Thalassery which can be reached via Edapally just five kilometers along the Panvel Highway. The nearest airport is located at the international airport at Calicut just about a hundred kilometers away. The geographical coordinates are 11.460N latitude and 75.270E longitude.

The Brennen College is over a century old and has currently been deemed a university in December 2004. It is running eight post graduate and seventeen graduate courses. The Brennen college has ample research facilities in Malayalam, Hindi, and Sanskrit. The faculty strength is about a hundred while the student enrollment is over 2000 students in various academic programmes.

The college had been initiated by Edward Brennen who came to settle in Thalassery after he was shipwrecked on the mainland. Today the college ranks among the foremost educational institutions of Kerala.

The Government Brennen College of Dharmadom can be reached by train from the Thalassery railway station located about five kilometers away. The international airport at Calicut lies about a hundred kilometers from Dharmadom. It is easily reached by road on the Edapally and Panvel highway.